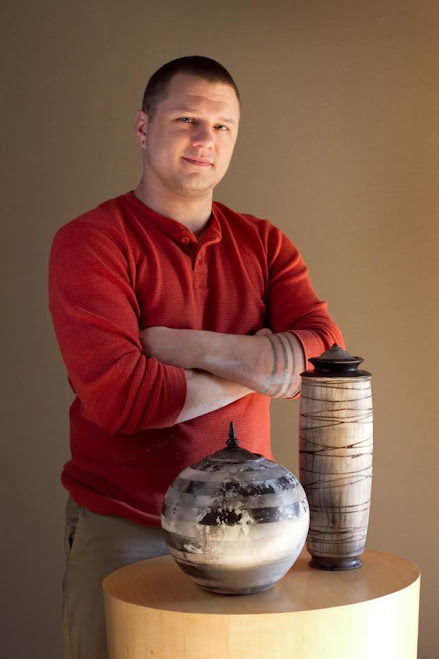 Josh received his BFA from Bowling Green State University of Ohio where he pursued a BFA in Creative Writing, and Glass Art within the School of Art. While there he immersed himself in study, under the no nonsense and straight forward technical instruction of late artist  educator Robert ‘Bud’ Hurlstone. Josh still proudly touts his title as being one of ‘Hurlstone’s Hellions’. After graduating 2004 Josh continued his studies at the Glass Pavilion [Toledo Museum of Art] and along the craft rich Eastern coast; such as the Corning Museum of Glass and Penland School of Crafts where he studied and created closely with some of America’s finest artists & craftspeople in the fields of glass, ceramics, and studio equipment design.

In 2009 a change in health and circumstance lead Josh to turn to clay as a means to fulfill creative goals. In the cool earth he found some answers to questions that had been eluding him.

In 2013 Josh began his graduate studies at the University of Missouri - Columbia with R. Bede Clarke and Joe Pintz. There he served as an instructor of record in the Ceramics department; while making elaborately constructed, vibrant, and tactile sculptures steeped in surrealism and science fiction. His MFA Thesis solo exhibition titled Friends from Isolation opened in May of 2016.

In 2017 he returned to southern Ohio to continue work in clay as a Teaching Artist in Residence at Queen City Clay. In the Summer of 2019, opened his exit show COLORLUST, with both sculptural and utilitarian works in vibrant mono-printed color and patterns.

Josh is currently hard at work developing his teaching practice as a Full Time instructor/lecturer at the University of Northern Kentucky in Spatial Arts. He resides in the historic Northside area of Cincinnati.